The Single Comb Black Orpington was the first of a distinctly new breed of fowl originated in 1886 by William Cook of Orpington (hence their name). County of Kent, England. William Cook, died in 1904, just as  Orpingtons were beginning to really grow in popularity. Over the years much has been written about and examined by breeders in their work to develop Orpingtons as we know them today.

The White Orpington of today holds its high position in the Poultry Field, clearly on its merits. There has been no boom this time, it has steadily but surely forged ahead in the last five years. The reason for this is quite clear to anyone who bred them ten or twelve years ago. The best White Orpingtons of today would hardly be recognized as belonging to the same breed as the White Orpingtons bred twelve years ago. Today they are bred on utility lines as well as exhibition lines, having lost none of their beauty, but rather increased it. The back has been lengthened and the depth of the body has been increased, thus increasing the egg capacity. The shank has been lengthened, thus increasing the sprightliness of the bird.

The White Orpington, with its rich, red comb and wattles, stout beak, red eye, pure white plumage, standing on its sturdy wide spread legs, combining grace and beauty, demands the admiring attention of even those who previously had not been interested in poultry. But beauty is only a small factor in the merits of the White Orpington. It is as a general utility star where the White Orpington stands out the brightest in all poultrydom. As a table fowl, their meat is soft, tender and juicy. On account of their long deep bodies there is so much white meat. They grow very fast, reaching the broiler size in from six to eight weeks. They make a growth of two pounds per month under good care and feeding. White Orpingtons have no superiors as layers, as shown by official egg record of 303, 241 eggs per year, and 200 egg White Orpington hens are numerous with frequent flock averages of over 150 eggs per hen are quite common. In an Australian contest a pen of White Orpingtons averaged 252 eggs per hen for twelve months. 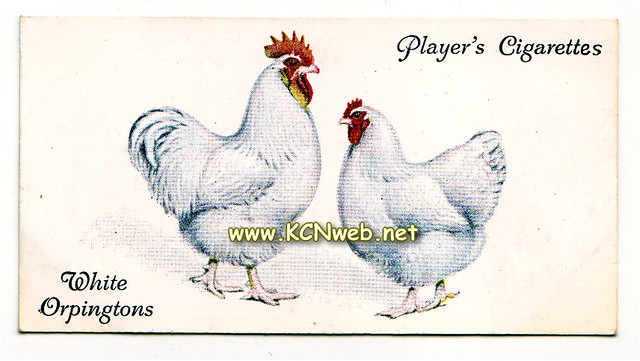 The vigor and vitality of the White Orpingtons has never been questioned and their size and profuse feathering makes them adaptable to all climates and climatic changes. They are tame and gentle, thus being suitable for the back yard poultry lot or the free range of the farm. They are good hustlers and able to obtain all food that can possibly be found.

The common faults of White Orpingtons a few years ago were brassy color in the necks and hackles of males, light eyes, too short in the back and too loose feathered, and cochin in type. While, I do not claim that we have fully solved the color question, still a wonderful improvement in color has been made. There are “stay white” Orpingtons now being bred and they are rapidly increasing in numbers; just a very few years and we will have “stay white” flocks. Breeders have directed their attention to the color of their males, but neglected their females. I admit you will breed better colored chicks from a good colored male and fair colored females than good colored females and a fair colored male, but in order to get good color, both sides of the mating must be white in both surface and under color, clear to the skin and end of the quills. When White Orpington chicks are first hatched they vary in color from chalk white to almost black, and some will be of various shades of creamy white. Do not be alarmed at this variance of colors in the baby chicks. The ones that are the darkest or whitest will finish the whitest, the darker ones being the whiter, it is from these that you get your “stay white” birds. We hear lots about “stay white” males, but what about “stay white” females? It is just as essential to have “stay white” females as “stay white” males, and just as soon as breeders realize the important part the White Orpington female plays in the color, the sooner will the vexed color problem be solved, and we will have a fowl so white its color will never be questioned. The lengthening of the back and getting rid of the superfluous fluff on the White Orpington not only improved its appearances but lengthening of the back gave it more egg capacity, in order to breed to lengthen the back, care must be taken not to sacrifice width and depth of body. The White Orpington must retain its massiveness so in our eagerness to get length of body, we must not overlook width and depth of body. I consider that any attempt to reduce the standard weight of the White Orpington will correspondingly reduce the egg capacity and meat producing ability.

There has been a craze of late years for smoothness of feather. I think that most breeders are in accord on the point. An Orpington should have smooth and compact feathers. This of course, can be carried too far. I noticed a report of one of the large shows in a well-known Poultry Journal in which the reporter said, “1st Prize has the feather of a Rock on an Orpington.” Now the question is, do we want the tight feather of a Rock on an Orpington? Personally, I don’t think so. We want an Orpington to have smooth compact feathers but not as tight and close leathered as the Rock. So, if we breed them with the tight feather of the Rock, we are losing one of the characteristics of the breed. It would have a tendency to do away with the massive appearance the Orpington now has. It would also have a tendency to create narrow tails which is a decided draw back to an Orpington. The width should be carried from the front clear back to the tail and not pinched at the back or over the tail. The reason we see so many wedge shaped Orpingtons is because breeders have been relying too much on the male. There are two ends to the female as well as to the male and they must both have width.

In conclusion let me say, that the coming 1921-22 Show season is going to see a wonderful showing of White Orpingtons.

Yours for better White Orpingtons and more of them.

Standard Orpingtons are quite a large fowl so whether you are going to buy a coop or go for your own homemade chicken housing you will need to go for the larger allowances to ensure they are housed comfortably. With their fluffed out feathers they look larger than they actually are but still at up to around 3.60 kg for hens and 4.55 kg for roosters they are sizeable. Many of the colour variations are also available in the bantams.

At Sandusky, Ohio, on the model poultry farm of L. Black, were bred the Bonnie Brae Single Comb Buff Orpingtons, a strain of Orpingtons that came to be known the world over but now, decades later, seem to be no more.

We wish every reader of this little historically descriptive article by Jas. T. Huston of Bonnie Brae could have before them as they read the true-to-fact catalogue of this wonderful poultry plant, showing the farm and its modern buildings (modern at the time) as well as the noted birds which have been making Orpington history. To the left of the farm, facing the public highway, is the residence of Mr. Black. Directly in the rear a large hot house is situated in which are grown winter vegetables for family and employees.

It need not be said that the chickens come first, however, and that these early greens fed them are one of the factors which are a part of the great whole and which accounts for the robust, rapid and vigorous growth of Bonnie Brae birds. A section of this enclosure is also used for keeping their chickens in winter, affording the birds therein, in their tender infancy, the benefit of a glass covered run, where, in cold zero days, these little “Bonnie Braes” are as busy picking out the tender shoots and scratching with their sturdy legs as later many of them, in robust maturity, will be scratching at the O. K. Litter in the exhibition coops at poultry shows all over this broad land. This building is of cement, steel and glass. Colony brooders are used within the building as hovers for the chicks.

Directly in the rear is the garage with granary above and fruit and vegetable cellar below. In the rear of the garage is the packing and shipping house. Power machines are used here for grinding the tons of grain consumed by the hundreds and hundreds of adult and growing stock. In the distance, and beyond a dale, is found the conditioning houses, cock pens and the large breeding houses.

You must see these modern, yet common sense, buildings to appreciate the magnitude of this magnificent poultry farm and plant. One building alone is 200 feet long and contains eighteen breeding compartments. Runways 200 feet long and eighteen feet wide are found on both sides of the breeding houses, and the house is situated on a sloping hillside, a beautiful growth of alfalfa pasture and shaded with plum trees. All runs can be thrown together or open individually into an orchard of twelve acres. The cockerels and pullets are finely cared for and given every advantage for uninterrupted growth by having them run at large in plots of orchard of approximately five acres each. Running water is provided in each yard. While you are reading this, carpenters and builders are at work on another house at Bonnie Brae which, when completed, will be used for additional matings; this house will be fifty by twenty feet. At the time of this writing Mr. Black had nearly 1,000 young birds and around 200 of his selected females and males that represent the “cream” of his breeding, hundreds of these young ready for show coops and breeding pens, and which he offers at prices consistent with quality. The slogan at Bonnie Brae was: “Big Buff birds and bred-to-lay, buy the best at Bonnie Brae.”

We have told you of the home of these famous Buffs. Let us, please, just for a brief minute or two, tell you of the stock. To have seen these birds in life, then refresh one’s mind by looking at them reproduced in illustration, is a satisfaction. At the Chicago National Show, last January, Bonnie Brae Farm showed seventy wonderful Orpingtons and out of those seventy grand specimens, all worthy of comment, fifty of them came under the ribbons; this in one of the grandest classes of the year. Think of it – fifty prize winners by one exhibitor in a Chicago National class.

Valuing the Bonnie Brae catalogue as a book rather than a sales medium,  Mr. Black was asked if he sold it as a book or furnished it as a catalogue to prospective customers or those breeding Buff Orpingtons, and were informed that it was not only free to real interested Buff Orpington fanciers, but that Mr. Black desires it to be in the hands of every breeder of Buffs and those contemplating taking up this variety.